Whether you are a professional or an amateur, there is some woodworking equipment that you need for a great working experience. Woodworking vise is one of them. A woodworking vise consists of a pair of jaws that hold the piece and a screw mechanism that allows you to adjust the grip of the piece.

Typically, a woodworking vise, just like a workbench, attaches itself to a fixed point. The jaws of these tools are usually made of wood or metal, and to keep your workpiece from harm’s way, they are faced with wood.

However, there are many woodworking vise types available. If you want to learn what each one can do, you are in the right place.

Plain screw vises are usually made of cast iron. They can provide a high level of precision. These tools have a sliding motion and a primary steel screw with supportive threads that move along.

This tool does justice to its name. After the job is done, a quick-release vise can be swiftly released by opening the split nut. Instead of multiple turns that other types of vise require, this one allows you to release the jaws with just a single twist of the lever.

And due to the quick-release split nut, the speed of the operation increases significantly. That is why this type of vise is commonly used in bulk production projects with repetitive operations.

Woodcraft vise is the type that is typically found at home. While woodwork vises tend to be heavier, woodcraft vise is relatively lighter and easier to operate and carry about.

Woodcraft vise is usually used for clamping small woodwork items. This type of vise is specially used by hobbyists and handymen, but you can also find it in many professional woodworking workshops. It can also be used to repair various wooden household items where you may need to clamp together glued joints. 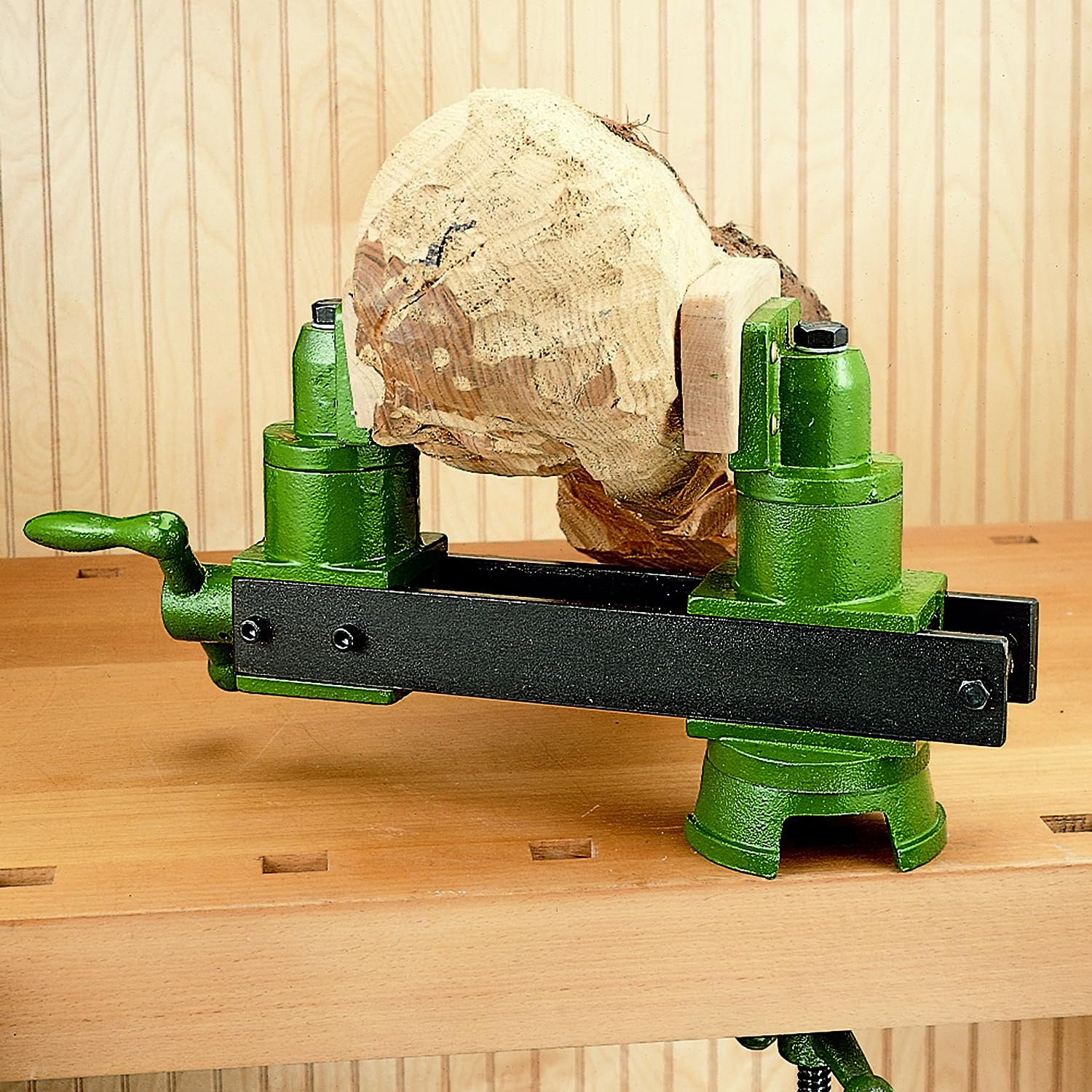 A pattern maker’s vise provides precision to your various woodcraft projects. This versatile vise can tilt, pivot, and rotate, allowing you t clamp a workpiece in any position you want. Pattern maker’s vise doesn’t offer many variations. However, it is a very important tool for a woodworker who engages in various woodworking tasks.

This tool enhances the work capability of every woodworker’s workbench. What differentiates this vise from other types of vise is that you do not attach it to other locations, but it becomes an integral part of the workbench. The jaws and the handle are attached permanently to the workbench, and they stay there. Workbench vises also have three varieties. 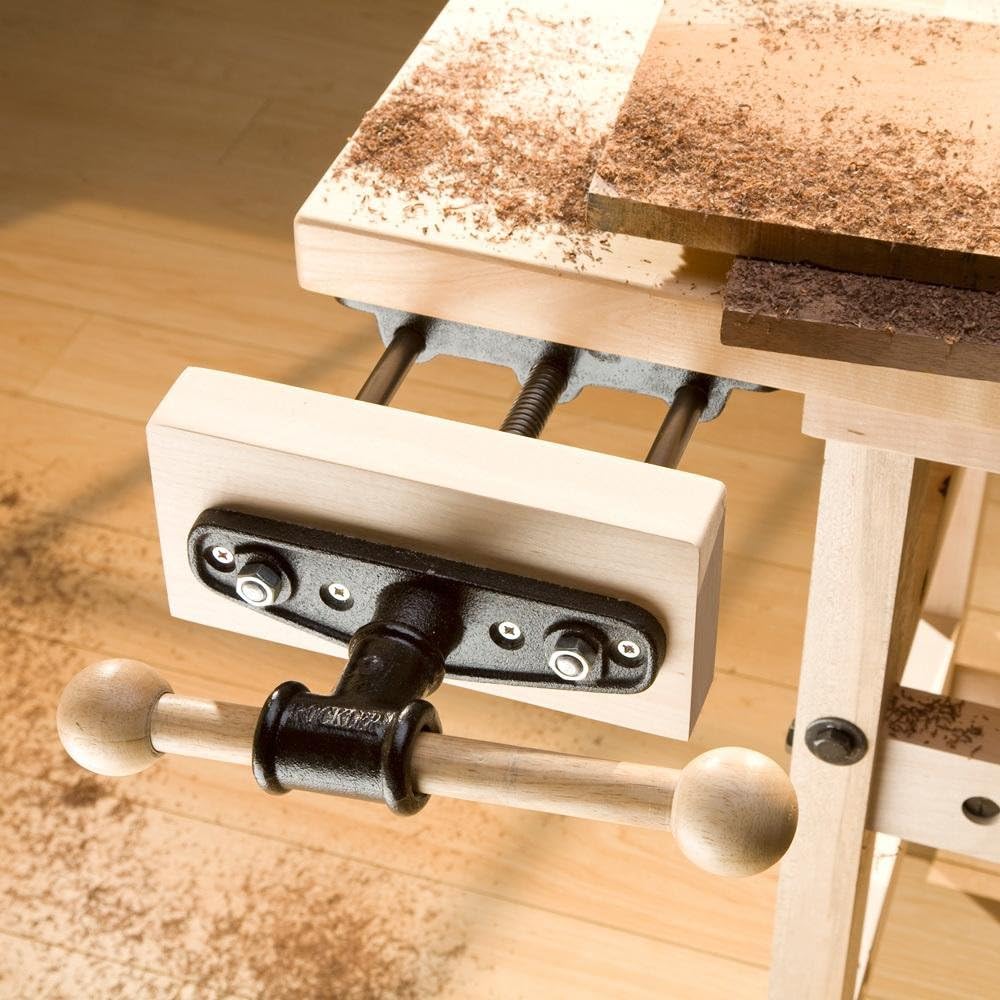 Face vises can hold wooden workpieces while you perform operations such as drilling and sawing. The traditionally used material for this vise is wood. A wood face vise features a movable front jaw. This jaw is mounted to a broad, square beam, which slides in and out of a matching channel. The beam keeps the jaw properly aligned and steady, and a wooden bench screw drives the jaw. The entire mechanism is attached to the benchtop from underneath.

As its name suggests, the end vise or tail vise is built into the end of a bench. The workpieces can be clamped to the bench between its jaws. The benchtop is used as the inside jaw by the flush-mounted end vise, while the movable jaw is driven tight against it by the bench screw.

The end vise tool is more flexible than it may appear. It has a rectangular hole cut into its top, which makes it distinguished from other vises. And along the front of the benchtop, a series of other holes are aligned with that hole.

The alignment of these bench dog holes in a tail vise enables it to secure panels or workpieces that would be too lengthy to clamp across the benchtop with a front vise and dogs.

Leg workbench vise is installed into the leg of the workbench. The leg vise consists of long jaws. The outside jaw is the movable one, and typically, it is made of large-dimension hardwood stock. The jaws are adjusted by a screwdrive that is located a bit above the center of the vise’s length. Most leg vises have an adjustable beam or screw at the foot to keep the jaws parallel and to avoid weakening.

The engineer’s vise is a heavy-duty tool mounted on the benchtop and bolted to its surface. It weighs similar to an anvil and can even be used as a hammering block occasionally since many models consist of a flat surface behind the jaws designed for use as an anvil. This vise is also known as machinist’s vise and sometimes a railroad or mechanic’s vise.

Primarily, an engineer’s vise is used to grab hold of things steadily in its rough jaws, which free up both your hands and allows you to bend, hammer, cut, drill, shape, or perform any number of other operations.

However, the hard jaws of this vise can scar or damage the wood that you are working on. Nowadays, some models are sold with reversible jaws that are serrated on one side and smooth on the other. If you need wood vise only occasionally and have a frequent need for the metal vise, you may purchase jaw liners.

Also, many engineer’s vises have pipe jaws that are located underneath the primary, flattened jaws. The base of these vises swivels, enabling them to accommodate a number of different workpieces presented at different angles. You will find that an engineer’s vise is quite an essential device to have in any woodworking shop.

Woodworking vises are essential tools for woodworkers. There are various woodworking vise types available. Different type serves different purposes. Learning about these different vise types will help you choose the type you need for your particular project or tasks.

We hope we were able to help you in your expedition to understand various types of woodworking vises. 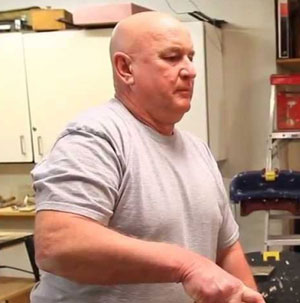 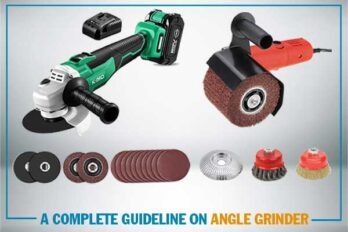 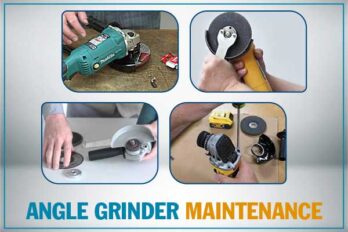 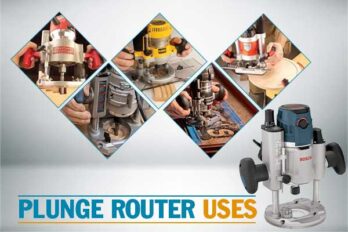